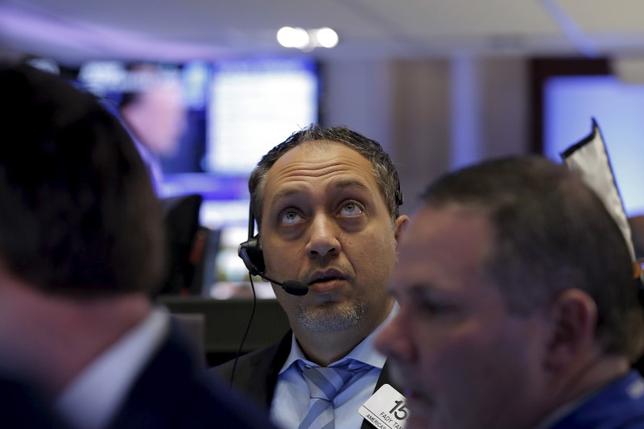 Technology shares with lofty valuations, including those of midcap data analytics company Tableau Software Inc and Internet giant Facebook Inc, extended their losses on Monday following a gutting selloff in the previous session.

Shares of cloud services companies such as Splunk Inc and Salesforce.com Inc had also declined sharply on Friday. They fell again on Monday, dragging down the Nasdaq Composite index 2.4 percent to its lowest in nearly 1-1/2 years.

“Any disappointment is being taken out to the woodshed.”

These stocks had high valuations before the selloff on Friday, driven by years of hype that spending from enterprise customers was moving to big-data analytics and cloud computing.

“I think that what we see is a crisis in valuation for the highest multiple stocks, where valuations … had been driven too far for thematic reasons, what investors perceived as the hottest growth areas,” Avondale Partners analyst Randle Reece said.

The recent declines in the shares have come as some hedge funds have started to sell out of big exposure to the Internet services, software and retail sectors. Long-short hedge funds had taken notably overweight positions in these sectors late in 2015 as other areas of the market faltered while these stocks kept rallying.

Those industries dramatically underperformed the broader market last week, with losses of 7 to 12 percent; hedge fund exposures have been reduced, but funds have not yet unwound those positions, according to Credit Suisse prime services.

On Monday, Tableau shares fell another 10 percent to $37.28. The stock lost half its market value on Friday after the company cut its 2016 revenue forecast, citing increased competition.

“Is Tableau the canary in the coal mine on IT spending or is competition muddying the waters?” RBC Capital Markets analysts asked in a research note.

If Tableau, with its lower average selling prices, was finding it difficult to sell its products to enterprise customers, it could mean trouble for companies with more expensive products, RBC said.

However, the brokerage noted that companies like Microsoft Corp and SAP SE have reported strong demand.

Shares of Workday Inc, Teradata Corp and Hortonworks Inc, which declined on Friday, were down again on Monday, as were shares of Cornerstone OnDemand Inc and Qlik Technologies Inc.

Google-owner Alphabet Inc’s shares were also down on Monday. Apple Inc shares were up slightly.

Adding to the gloom, IT services provider Cognizant Technology Solutions Corp forecast its slowest revenue growth in 14 years for the current quarter as clients rein in IT spending. Cognizant’s shares fell 8.5 percent.

LinkedIn Corp had recovered a bit from a 43 percent drop on Friday that wiped out nearly $11 billion of its market value, but as the market weakened, shares fell again, and were lately down 0.7 percent.

The social network for professionals shocked Wall Street on Thursday with a revenue forecast that fell far short of expectations.